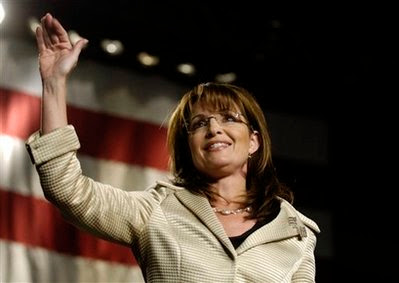 If you still doubt McClatchy is infected with Palin Derangement Syndrome (PDS), the latest McClatchy slam on Sarah Palin just might convince you. Matt Zencey from McClatchy's Anchorage Daily News published a partisan, deceptive editorial over the weekend blasting Sarah Palin for campaigning for Saxby Chambliss.

In the weekend editorial, Matt Zencey writes that Palin doesn't know enough about Chambliss, and, here's the lie -- claims Chambliss attacked the patriotism of Max Cleland.
McClatchy's Zencey is simply parroting a Dem talking point that is not true. Kathryn Jean Lopez weighed in on the shameless attack by McClatchy:

You may recall John Kerry pushing this bit of historic dishonesty about the Cleland-Chambliss race during his campaign for president; the Massachusetts Democrat claimed: “To this day I am motivated by — and I will be throughout this campaign — the most craven moment I’ve ever seen in politics, when the Republican party challenged this man’s patriotism in the last campaign.” Bill Clinton would return to the Cleland ad to try to take heat off Democrats who wouldn’t condemn moveon.org for their shameful “Betray Us” ad attacking then Iraq-war commander David Petraeus.

Now, in Anchorage — and no doubt all over MSNBC’s talking-heads shows today — the myth lives on. The ADN item accused: “In the best Karl Rove fashion, Chambliss the draft-evader attacked Cleland the war hero for being soft on terrorism. Distorting Cleland’s votes about workplace rules for the new Homeland Security Department employees, Chambliss portrayed him as a tool of terrorists like Osama bin Laden.”

Saxby Chambliss, of course, did not question Cleland’s patriotism. He ran an ad that, yes, included images of Saddam Hussein, Osama bin Laden, as well as images of the American military. They were reminders we’re at war. The ad attacked Cleland for voting 11 times against a homeland-security bill that would have freed the president from some union mandates in setting up the new department. Agree or disagree with the bill (which was co-sponsored by then-senator Zell Miller of Georgia, a Democrat), the non-union employee measure, or the establishment of the department itself (National Review wasn’t a fan of the idea), but it was absolutely fair game for Chambliss to bring it up during the course of his campaign for Cleland’s Senate seat.

As NR editor Rich Lowry has written of the incident, “If you can’t criticize the Senate votes of a senator in a Senate race, what can you criticize?”

McClatchy is lying about Chambliss -- and Palin. Have you cancelled your McClatchy subscription yet? Above photo (AP/Stephen Morton) shows Sarah Palin while campaigning with Saxby Chambliss Monday.
.
Previous Palin Derangement at McClatchy:
on Monday, December 01, 2008